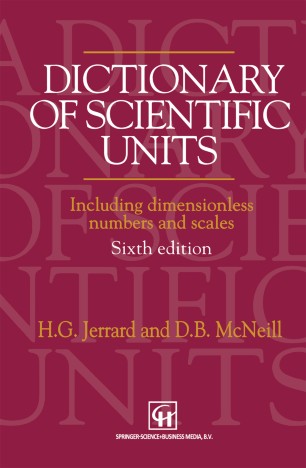 Including dimensionless numbers and scales

units have been included. References, which now number approximately 650, have been brought up to date. The most recently accepted values of the physical constants have been provided. Our thanks go to all those who, since the fifth edition, have helped in this revision by suggestions. In particular the authors express their gratitude to Jane M. Jerrard who, with enthusiasm, put the text into a computer and eliminated the editorial scissors and paste and simplified the onerous and long task of producing a text from the fragmented material of the revision. In the preface to the fifth edition it was suggested that the book provided at that time the most complete and up-to-date information of its kind available. The authors again make the same claim for this sixth edition. H. G. JERRARD D. B. McNEILL Warsash Newtownards Southampton Northern Ireland England Preface to the first edition The intense specialization that occurs in science today has meant that scientists working in one field are often not familiar with the nomenclature used by their colleagues in other fields. This is particularly so in physics. This dictionary is designed to help overcome this difficulty by giving information about the units, dimensionless numbers and scales which have been used, or are still being used, throughout the world. Some four hundred entries are provided and these are supplemented by about five hundred references. The definition of each entry is given together with relevant historical facts.