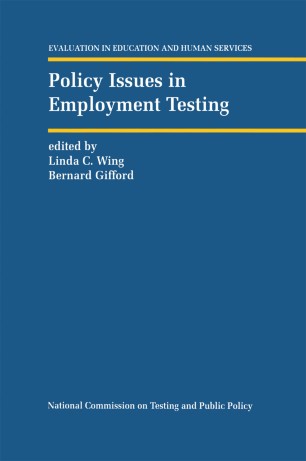 Part of the Evaluation in Education and Human Services book series (EEHS, volume 35)

Linda C. Wing and Bernard R. Gifford How should a society committed to the ideas of individual merit, equal opportunity, and the free marketplace allocate scarce educational and employment opportunities? How can that society draw distinctions­ fairly and justifiably-among people competing against each other for the same opportunity? These are among the central questions of a democracy. How a society answers them reveals a great deal about its values and its priorities, and determines a great deal about its future course. In recent decades, we have placed the standardized pencil-and-paper test at the center of these fundamental questions about the nature of opportunity allocation in American life. In more and more areas of our lives-schools, employment, the military-we rely upon the standardized test to rank or classify people, and to assure ourselves that we have done so fairly. The papers gathered here were prepared at the invitation of the National Commission on Testing and Public Policy. (The editors of this volume were involved in the commission from its inception in 1987 until shortly after the publication of its major public report in 1990-Bernard Gifford as Chair and Linda Wing as Associate Director. 1) Each chapter focuses on an aspect of employment testing-a topic that could hardly 1 POLICY ISSUES IN EMPLOYMENT TESTING 2 be more in need of calm deliberation and reasoned discussion than it is today.