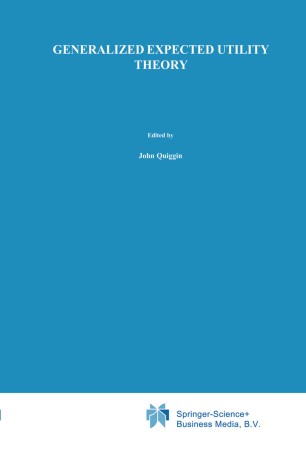 Economic analysis of choice under uncertainty has been dominated by the expected utility (EU) model, yet the EU model has never been without critics. Psychologists accumulated evidence that individual choices under uncertainty were inconsistent with the predictions of the EU model. Applied work in areas such as finance was dominated by the simpler mean-variance analysis. In the 1980s this skepticism was dispelled as a number of generalizations of EU were proposed, most of which were capable of explaining evidence inconsistent with EU, while preserving transitivity and dominance.
Generalized expected utility is now a flourishing subfield of economics, with dozens of competing models and considerable literature exploring their theoretical properties and comparing their empirical performance. But the EU model remains the principal tool for the analysis of choice under uncertainty. There is a view that generalized models are too difficult to handle or incapable of generating sharp results. This creates a need to show that the new models can be used in the kinds of economic analysis for which EU has been used, and that they can yield new and interesting results.
This book meets this need by describing one of the most popular generalized models -- the rank-dependent expected utility model (RDEU), also known as anticipated utility, EU with rank-dependent preferences, the dual theory of choice under uncertainty, and simply as rank-dependent utility. As the many names indicate, the model has been approached in many ways by many scientists and for this reason, consideration of a single model sheds light on many of the concerns that have motivated the development of generalized utility models.
The popularity of the RDEU model rests on its simplicity and tractability. The standard tools of analysis developed for EU theory may be applied to the RDEU model, but since RDEU admits behavior inconsistent with EU, the field of potential applications is widened. As such, the RDEU model is not as much a competitor to EU as an extension based on less restrictive assumptions.