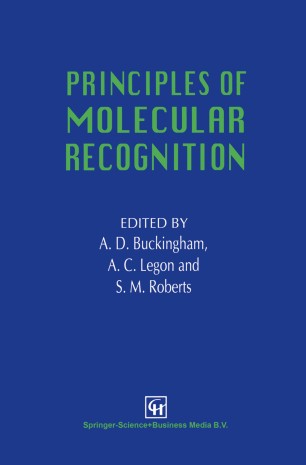 The importance of molecular recognition in chemistry and biology is reflected in a recent upsurge in relevant research, promoted in particular by high-profile initiatives in this area in Europe, the USA and Japan. Although molecular recognition is necessarily microscopic in origin, its consequences are de facto macroscopic. Accordingly, a text that starts with intermolecular interactions between simple molecules and builds to a discussion of molecular recognition involving larger scale systems is timely. This book was planned with such a development in mind. The book begins with an elementary but rigorous account of the various types of forces between molecules. Chapter 2 is concerned with the hydrogen bond between pairs of simple molecules in the gas phase, with particular reference to the preferred relative orientation of the pair and the ease with which this can be distorted. This microscopic view continues in chapter 3 wherein the nature of interactions between solute molecules and solvents or between two or more solutes is examined from the experimental standpoint, with various types of spectroscopy providing the probe of the nature of the interactions. Molecular recognition is central to the catalysis of chemical reactions, especially when bonds are to be broken and formed under the severe con­ straint that a specific configuration is to result, as in the production of enan­ tiotopically pure compounds. This important topic is considered in chapter 4.