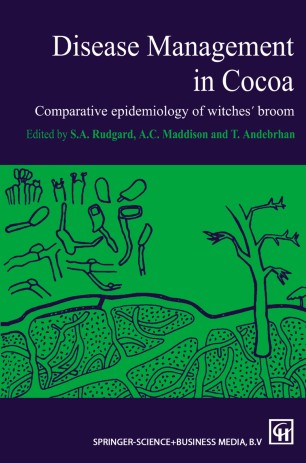 The Monograph deals with the conception, planning, implementation, results and conclusions of the International Witches' Broom Project (IWBP), which was set up in 1985 with the aim of producing an economic management system for witches' broom disease of cocoa. The contributions of the various sponsors, and the roles played by the participating organizations and scientists are described in the introductory chapter. Chapter 2 provides a review of what was, and what was not known from published literature about the cocoa­ witches' broom pathosystem in 1989. The scope of the project and the approaches used are covered in Chapter 3, while Chapters 4 to 13 report on the field studies themselves in detail. The recent appearance of witches' broom in the important cocoa area of Bahia in Brazil is described in Chapter 14, before disease management recommendations are summarised and future prospects considered in the closing chapters. The many man-years of field research in the IWBP in a total of six countries generated much useful information which was analyzed both in the individual countries and collectively. Even with a document of this size, certain information and analyses with less direct relevance to disease management had to be omitted. It is expected that more detailed treatments of certain aspects will emerge in scientific papers, and further analyses will be undertaken.