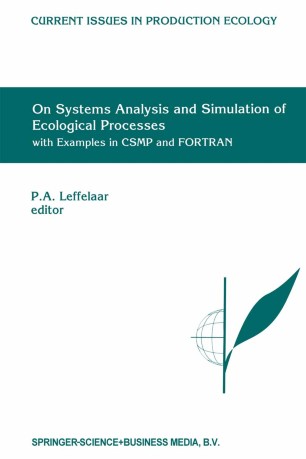 A system may be studied by distinguishing its major components, characterizing the changes in them by differential equations that form their simplified representa­ tions, and then interconnecting these representations to obtain a model of the original system. Developing the model is the systems synthesis phase. The behaviour of the model may now be studied and compared with experimental results obtained from the system. This research method is called systems analysis and simulation. Systems analysis and simulation can serve to make predictions, to improve the insight in systems, and to test knowledge on consistency and completeness. Predictive models are rare in ecology, simply because the underlying processes which form the basis of the models are seldom well known. A successful example of a predictive model was the work of van Keulen (1975). He showed that under semi­ arid conditions, where water is the main factor controlling primary production, the simulation technique could predict the production of natural grasslands. Fair predicti­ ons could also be made for the Sahelian pastures (Penning de Vries & Djiteye, 1982). Predictive models of populations of different pest and disease organisms are being used in biological control systems (Zadoks et aI., 1984).

` ... the concept and the structure of the book are surprisingly clear and homogeneous ... I recommend the book for those who are themselves new in the field or who teach beginners in systems analysis as applied in ecology, and also to researchers seeking an advanced tool in the analysis of their own dynamical problems. '
Abstracta Botanica 18(2):56, 1994