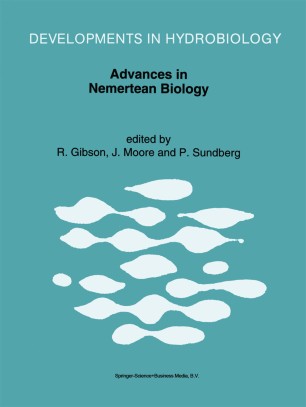 Part of the Developments in Hydrobiology book series (DIHY, volume 89)

In any scientific discipline, meetings with presented papers and discussions are the most effective stimulus to the advancement of knowledge. Nemerteans have long been largely neglected because their taxonomy is difficult: the need for histological study of serial sections has proved inhibiting to most zoologists. During the last twenty years, however, this intriguing phylum has attracted the attention both of increasing numbers of taxonomists as well as of workers interested in many aspects of, for example, their ecology, evolution, physiology and fine structure. The enthusiam stemming from the First International Meeting held in Philadelphia during December 1983 made it abudantly clear that regular meetings of this type should be continued. The Second, at the Tjärnö Marine Biological Laboratory in Sweden (August 1986), emphasized the importance of such international gatherings. The Third Meeting was held in Britain, at Y Coleg Normal, Bangor, North Wales, August 10--15, 1991, with 24 participants from six countries. This volume records most of the papers given at the conference.