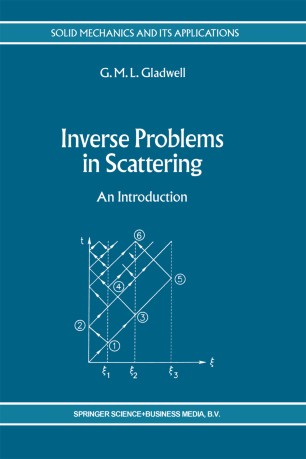 Part of the Solid Mechanics and its Applications book series (SMIA, volume 23)

Inverse Problems in Scattering exposes some of the mathematics which has been developed in attempts to solve the one-dimensional inverse scattering problem. Layered media are treated in Chapters 1--6 and quantum mechanical models in Chapters 7--10. Thus, Chapters 2 and 6 show the connections between matrix theory, Schur's lemma in complex analysis, the Levinson--Durbin algorithm, filter theory, moment problems and orthogonal polynomials. The chapters devoted to the simplest inverse scattering problems in quantum mechanics show how the Gel'fand--Levitan and Marchenko equations arose. The introduction to this problem is an excursion through the inverse problem related to a finite difference version of Schrödinger's equation. One of the basic problems in inverse quantum scattering is to determine what conditions must be imposed on the scattering data to ensure that they correspond to a regular potential, which involves Lebesque integrable functions, which are introduced in Chapter 9.