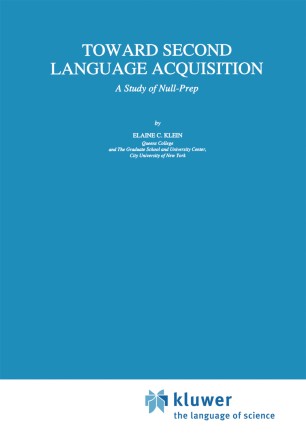 This book uniquely illustrates how second language acquisition (SLA) data can instigate linguistic exploration and help inform linguistic and acquisition theory in crucial ways. It also offers new perspectives toward our understanding of the relationship between first and second language acquisition, Universal Grammar (UG), and the target language input. Specifically, examination of the L2 development of pied-piping and preposition stranding in English questions and relative clauses shows that the required preposition is frequently omitted by learners who have demonstrated accurate subcategorization knowledge of verbal complements in related declarative constructions. The `null-prep' data in the L2 grammar leads to an important cross-linguistic investigation of this largely ignored syntactic phenomenon in the world's languages; it also motivates exploration of the complex English input learners receive as positive evidence. An analysis of null-prep, piping and stranding is posited, including the relevant principles and parameters of UG involved. Based on this linguistic analysis, alternative explanations for the L2 phenomenon are offered, representing challenges to UG and markedness-based accounts of second language acquisition. Such challenges will be of interest to linguists as well as to students, teachers, reseachers and scholars interested in second language acquisition, particularly in its relationship to UG.