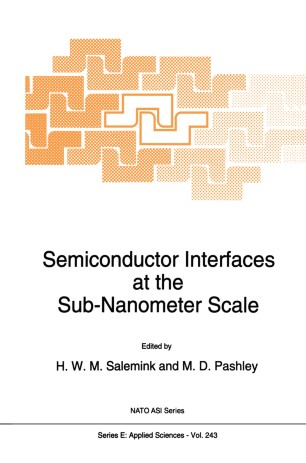 Semiconductor Interfaces at the Sub-Nanometer Scale

The Advanced Research Workshop on the Physical Properties of Semiconductor Interfaces at the Sub-Nanometer Scale was held from 31 August to 2 September, 1992, in Riva del Garda. Italy. The aim of the workshop was to bring together experts in different aspects of the study of semiconductor interfaces and in small-scale devices where the interface properties can be very significant It was our aim that this would help focus research of the growth and characterization of semiconductor interfaces at the atomic scale on the issues that will have the greatest impact on devices of the future. Some 30 participants from industrial and academic research institutes and from 11 countries contributed to the workshop with papers on their recent wode. . 'There was ample time for discussion after each talk. as well as a summary discussion at the end of the meeting. The major themes of the meeting are described below. The meeting included several talks relating to the different growth techniques used in heteroepitaxial growth of semiconductors. Horikoshi discussed the atomistic processes involved in MBE, MEE and MOCVD, presenting results of experimental RHEED and photoluminescence measurements; Foxon compared the merits of MBE, MOCVD, and eBE growth; Molder described RHEED studies of Si/Ge growth by GSMBE, and Pashley discussed the role of surface reconstructions in MBE growth as seen from STM studies on GaAs. On the theoretical side, Vvedensky described several different methods to model growth: molecular dynamics, Monte Carlo techniques, and analytic modeling.