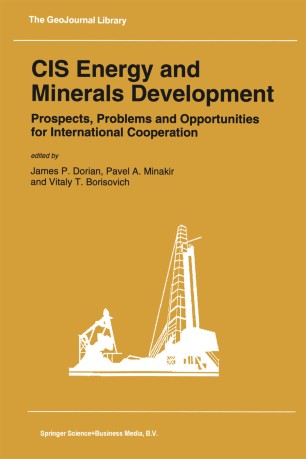 Part of the The GeoJournal Library book series (GEJL, volume 25)

The former Soviet Union possessed some of the world's largest reserves of energy and mineral resources. With the dissolution of the country in 1991, the former Soviet republics are now exercising complete control over their mining industries. The new Commonwealth of Independent States (CIS) consists of several new nations, well-endowed in hydrocarbons, metals, and industrial materials; efforts are now underway to boost development activities and attract foreign investment. Commonwealth members today are implementing policies to regulate energy and mineral development and enhance economic growth.
This book provides a comprehensive overview of the energy and minerals industries of the CIS and other former Soviet republics outside the Commonwealth. Prospects for international cooperation and trade in hydrocarbons, metals, and nonmetals are examined, as are opportunities for joint ventures and technology transfers in mining. Economic relations between the CIS and several Asian nations are also analyzed. Contributors to the book from throughout the Commonwealth, Asia, Europe, and North America have a wide variety of backgrounds in the energy and mineral fields, including government, academia, and industry.