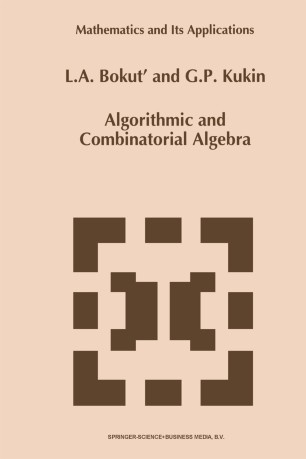 Part of the Mathematics and Its Applications book series (MAIA, volume 255)

Even three decades ago, the words 'combinatorial algebra' contrasting, for in­ stance, the words 'combinatorial topology,' were not a common designation for some branch of mathematics. The collocation 'combinatorial group theory' seems to ap­ pear first as the title of the book by A. Karras, W. Magnus, and D. Solitar [182] and, later on, it served as the title of the book by R. C. Lyndon and P. Schupp [247]. Nowadays, specialists do not question the existence of 'combinatorial algebra' as a special algebraic activity. The activity is distinguished not only by its objects of research (that are effectively given to some extent) but also by its methods (ef­ fective to some extent). To be more exact, we could approximately define the term 'combinatorial algebra' for the purposes of this book, as follows: So we call a part of algebra dealing with groups, semi groups , associative algebras, Lie algebras, and other algebraic systems which are given by generators and defining relations {in the first and particular place, free groups, semigroups, algebras, etc. )j a part in which we study universal constructions, viz. free products, lINN-extensions, etc. j and, finally, a part where specific methods such as the Composition Method (in other words, the Diamond Lemma, see [49]) are applied. Surely, the above explanation is far from covering the full scope of the term (compare the prefaces to the books mentioned above).