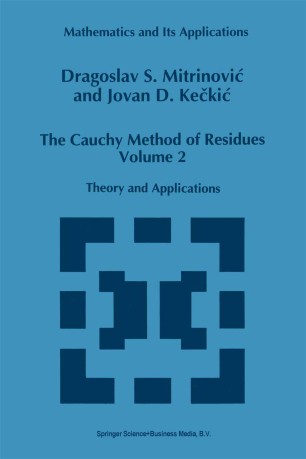 The Cauchy Method of Residues Volume 2

Part of the Mathematics and Its Applications book series (MAIA, volume 259)

Volume 1, i. e. the monograph The Cauchy Method of Residues - Theory and Applications published by D. Reidel Publishing Company in 1984 is the only book that covers all known applications of the calculus of residues. They range from the theory of equations, theory of numbers, matrix analysis, evaluation of real definite integrals, summation of finite and infinite series, expansions of functions into infinite series and products, ordinary and partial differential equations, mathematical and theoretical physics, to the calculus of finite differences and difference equations. The appearance of Volume 1 was acknowledged by the mathematical community. Favourable reviews and many private communications encouraged the authors to continue their work, the result being the present book, Volume 2, a sequel to Volume 1. We mention that Volume 1 is a revised, extended and updated translation of the book Cauchyjev raeun ostataka sa primenama published in Serbian by Nau~na knjiga, Belgrade in 1978, whereas the greater part of Volume 2 is based upon the second Serbian edition of the mentioned book from 1991. Chapter 1 is introductory while Chapters 2 - 6 are supplements to the corresponding chapters of Volume 1. They mainly contain results missed during the preparation of Volume 1 and also some new results published after 1982. Besides, certain topics which were only briefly mentioned in Volume 1 are treated here in more detail.