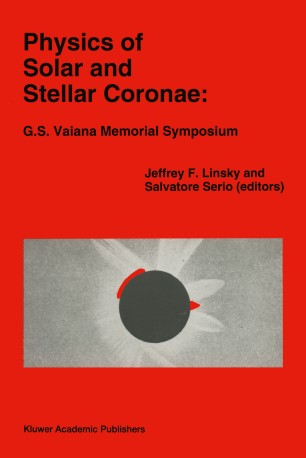 Proceedings of a Conference of the International Astronomical Union, Held in Palermo, Italy, 22–26 June, 1992

The original plans for a meeting to celebrate the second centenary of the As­ tronomical Observatory of Palermo were for a celebration with a double character. The gathering was to have both a historical character, appropriate for a bicenten­ nial, and a technical character, to note and chronicle the new phase of the history of the Observatory, which has prospered in parallel with the development of this fairly recent topic in astronomical research, the physics of stellar and solar coronae. After the untimely death of the Observatory's Director, Giuseppe S. Vaiana (Pippo to his many friends), a number of colleagues and friends insisted that the celebration should nevertheless be held and should be dedicated to this farsighted scientist who stimulated the development of coronal physics from the early x-ray observations of the solar corona to the recognition of coronae as an observable feature of nearly all stars. This memorial dedication did not change the character of the meeting, which was held in Palermo from 22 to 26 June 1992; as his contributions are very alive in the papers presented at the meeting and collected here, Pippo Vaiana has certainly achieved his place in the history of Astronomy.