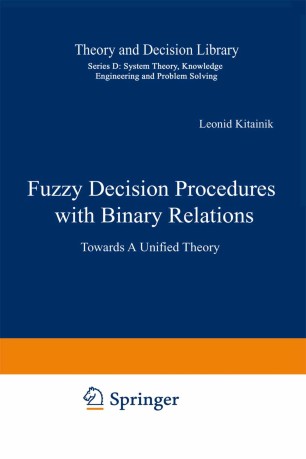 Towards A Unified Theory

In decision theory there are basically two appr~hes to the modeling of individual choice: one is based on an absolute representation of preferences leading to a ntDnerical expression of preference intensity. This is utility theory. Another approach is based on binary relations that encode pairwise preference. While the former has mainly blossomed in the Anglo-Saxon academic world, the latter is mostly advocated in continental Europe, including Russia. The advantage of the utility theory approach is that it integrates uncertainty about the state of nature, that may affect the consequences of decision. Then, the problems of choice and ranking from the knowledge of preferences become trivial once the utility function is known. In the case of the relational approach, the model does not explicitly accounts for uncertainty, hence it looks less sophisticated. On the other hand it is more descriptive than normative in the first stand because it takes the pairwise preference pattern expressed by the decision-maker as it is and tries to make the best out of it. Especially the preference relation is not supposed to have any property. The main problem with the utility theory approach is the gap between what decision-makers are and can express, and what the theory would like them to be and to be capable of expressing. With the relational approach this gap does not exist, but the main difficulty is now to build up convincing choice rules and ranking rules that may help the decision process.