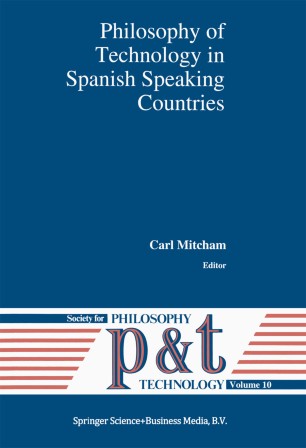 Part of the Philosophy and Technology book series (PHTE, volume 10)

This volume grew out of the experience of the First Inter-American Congress on Philosophy of Technology, October 1988, organized by the Center for the Philosophy and History of Science and Technology of the University of Puerto Rico in Mayagiiez. The Spanish-language proceedings of that conference have been published in Carl Mitcham and Margarita M. Peiia Borrero, with Elena Lugo and James Ward, eds., El nuevo mundo de la filosofta y la tecnolog(a (University Park, PA: STS Press, 1990). This volume contains thirty-two papers, twenty-two summaries, an introduction and biographical notes, to provide a full record of that seminal gathering. Discussions with Paul T. Durbin and others - including many who participated in the Second Inter-American Congress on Philosophy of Technology, University of Puerto Rico in Mayagiiez, March 199- raised the prospect of an English-language proceedings in the Philosophy and Technology series. But after due consideration it was agreed that a more general volume was needed to introduce English-speaking readers to a growing body of literature on the philosophy of technology in the Spanish-speaking world. As such, the present volume includes Spanish as well as Latin American authors, historical and contemporary figures, some who did and many who did not participate in the first and second inter-American congresses.