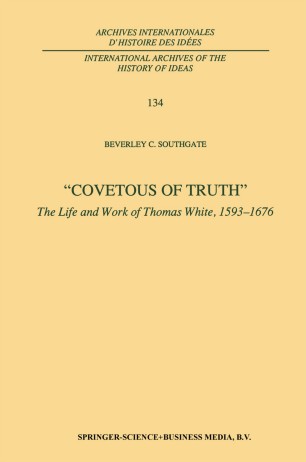 Thomas White, in the quatercentenary of his birth, is due for historical rehabilitation. English Catholic priest, philosopher, theologian, and scientist, he was a renowned and notorious figure in his own day; and, though long forgot­ ten, his work exemplifies aspects of major current concern to historians of ideas: in particular, the significance of the newly-revived sceptical philosophy; the complexity ofthe transition from scholasticism to the new philosophy; and the whole role of"minor", non-canonical figures in the historyofthought. White's writings embrace theology, politics, and natural philosophy, or science'; and in all these three areas, his work, after centuries of comparative neglect, has slowly been resurfacing. His theological significance received intermittent recognition through the eighteenth, nineteenth, and early-twentieth centuries; but more recently his great importance as leader of a whole "Blackloist" faction of English Catholics has become increasingly clear. Condemned by co-religionists in his own time as a dangerous heretic, he has been assessed by modem scholars as an anticipator of twentieth-century trends in Catholic theology, and even as "probably, after John Henry Newman, the most original thinker as yet producedby modem English Catholicism."2 Blackloism implied not only a theological, but also a political position; and that position was clarified and publicised by White in his single political treatise, The Grounds of Obedience and Government, published in the mid­ 1650s. His provocative stance was widely misunderstood and misinterpreted, and was soon anyway rendered untenable by the restoration of the monarchy.