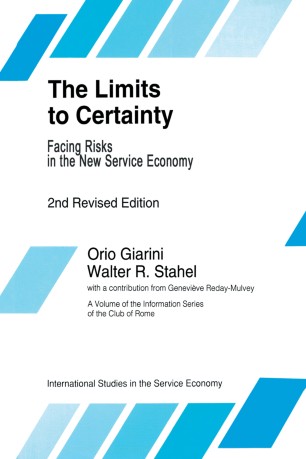 The Limits to Certainty

Part of the International Studies in the Service Economy book series (ISSE, volume 4)

I consider it a privilege to have been invited to write a preface for "The Limits to Certainty". It is however paradoxical that a theo­ retical physicist be asked to write about a monograph dealing mainly with service economics. Notwithstanding, I am delighted to do so. Indeed, it is striking that two so widely different fields like physics and social science, and more especially economics, can interact in such a constructive way. There is no question here of reductionism. Nobody claims to be able to reduce social scien­ ces to physics, nor to use patterns of social interaction in order to formulate new laws for atoms. What is at stake here is more im­ portant than reduction; the age-old separation between the so-cal­ led "hard" and "soft sciences" is breaking down. This separation has a long history. First, one should recall the influence of Newton's achievement on the formulation of scienti­ fic goals. This influence led to the formulation of equilibrium mo­ dels for supply/demand adjustment. As was noticed by Walter Weisskopf: "the Newtonian paradigm underlying classical and non-classical economics interpreted the economy according to the patterns developed in classical physics and mechanics, in analogy to the planetary system, to a machine or clockwork: a closed auto­ nomous system ruled by endogenous factors of a highly selective nature, self-regulating and moving to a determinate, predictable point of equilibrium" (The Geneva Papers on Risk and Insurance (1984), Vol. 9, no. 33, pp. 335-360).