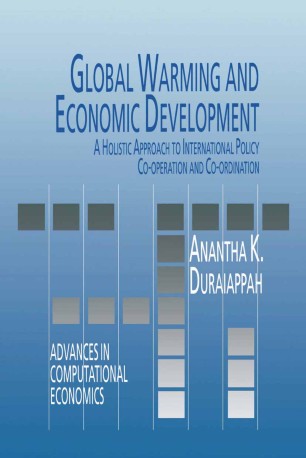 A Holistic Approach to International Policy Co-operation and Co-ordination

The computer revolution both in the hardware as well as in software has made it possible for economists to analyze complex issues which could not be solved in the past by analytical methods. A large library of numerical techniques are now available to economists for solving models ranging from a simple system of linear simultaneous equations to large non-linear dynamic optimization models. We attempt to take advantage of these advancements in computational economics to address the issue of global warming and economic development. The use of computer simulation models has enhanced the understanding of some of the underlying issues in the global warming literature which would have been impossible without these models. However, to date, the global warming issue has been addressed in a partial equilibrium framework. In other words, the climate scientists tend to specify economic variables as exogenous variables in their global warming models while the economists do the same by specifying the climate variables as exogenous variables in their global warming models. Both approaches ignore important feedback relationships which will be triggered when either economic or climate variables are perturbed. The ideal model structure would be one in which both systems are incorporated within one framework with emphasis on the long run effects of greenhouse gas curbing policies and the corresponding effect on the economic growth potential of the economies.