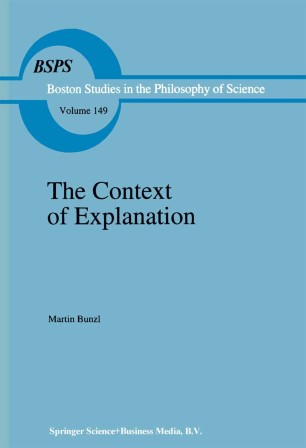 The Context of Explanation

Part of the Boston Studies in the Philosophy of Science book series (BSPS, volume 149)

In this book Martin Bunzl considers the prospects for a general and comprehensive account of explanation, given the variety of interests that prompt explanations in science. Bunzl argues that any successful account of explanation must deal with two very different contexts - one static and one dynamic. Traditionally, theories of explanation have been built for the former of these two contexts. That is to say, they are designed to show how it is that a 'finished' body of scientific knowledge can be put to explanatory use. But finished sciences are few and far between. Real 'explanation' also occurs in a dynamical context in which questions are asked and answers are given as theories are in the process of being constructed. Here, Bunzl argues that attending to explanation produced under these dynamic circumstances undermines prominent features of the theory of explanation produced in the traditional static context.