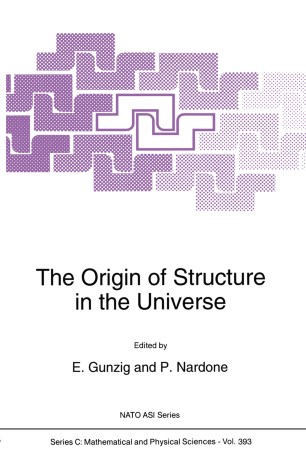 The Origin of Structure in the Universe

Edgard Gunzig and Pasquale Nardone RGGR Universite Libre de Bruxelles CP231 1050 Bruxelles Belgium The NATO Advanced Research Workshop on "The Origin of Structure in the Universe" was organized to bring together workers in various aspects of relativistic cosmology with the aim of assessing the present status of our knowledge on the formation and evolution of structure. As it happened, the meeting was particularly timely. Only two days before the 30 or so physicists from many countries gathered for a week at the Chateau du Pont d'Oye, in the forests of the southern Belgian province of Luxembourg, newspaper headlines all over the world announced the results of the analysis of the first full year of data from the Cosmic Background Observer Satellite (COBE). This long-awaited confirmation of the theoretically predicted anisotropy in the microwave background radiation opened a new era in observational cos­ mology. The realization of the new relevance of the subject of the workshop and the questions raised by the observational results, in addition to bring­ ing TV crews and newspaper journalists, naturally influenced and stimulated many discussions among the participants. The success of the meeting as usual is due to a combination of factors. Besides the high quality of the talks, discussions were encouraged by the warm atmosphere of the Chateau, for which we are grateful to Mme. Camille Orts, and its beautiful surroundings, not to mention the marvelous cuisine.