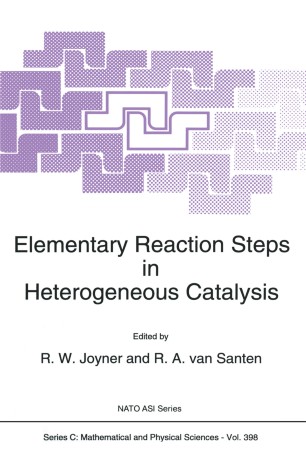 This book comprises the proceedings of a NATO sponsored Advanced Research Workshop held from 1st November to 6th November 1992 in the delightful Chateau de Florans, Bedoin, Vaucluse, France and entitled 'Elementary Reaction Steps in Heterogeneous Catalysis. ' The organisers are grateful to the Science Committee of NATO for their support of this meeting. This is believed to be the first wide ranging NATO ARW in the field of heterogeneous catalysis for 20 years, following a previous venture organised in Sardinia by Basolo and Burwell, of Northwestern University, Illinois, USA [1]. This volume collects the lecture presentations and reports on the lively Panel discussions. The idea for the meeting evolved from a series of International Symposia on Quantum Chemistry and Mechanism in Heterogeneous Catalysis. The first of these was held in Lyon, France in 1986, the second in Krakow, Poland in 1988 and the third in Berkeley, California in 1990. The organising committee of the present meeting was Bernard Bigot, France, Tony Farragher, Netherlands, Richard Joyner, UK, Mme. Danielle Olivier, France, and Rutger van Santen, Netherlands, (Chairman). We wish to thank all members of the committee but in particular Bernard Bigot, who undertook the very extensive work involved in the local organisation with consummate skill and made our stay in Provence a great pleasure. Bernard Bigot's secretary, Mme. Marie-Noelle Coscat and Richard Joyner's secretary, Mrs. Pat Gibbs, also deserve our considerable thanks. There were fifty-four participants from eleven countries.