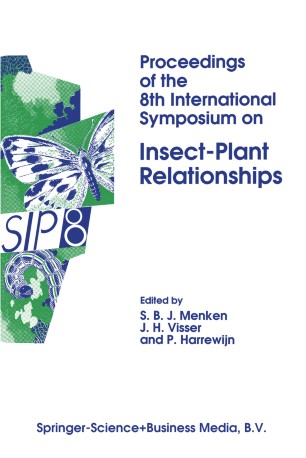 Proceedings of the 8th International Symposium on Insect-Plant Relationships

The papers in this book are organized as follows: insect-plant communities, host-plant selection, genetics and evolution, host-plant resistance and application of transgenic plants, and multitrophic interactions. Besides seven invited papers and a paper with concluding remarks, this volume also contains the short communications of all 115 oral presentations and posters. Included too, are the summaries of four European Science Foundation workshops held over the past two years, where European scientists discussed the state-of-the-art and the future of major topics in insect-plant interactions in order to develop better integrated research programs.
The field of insect-plant interactions nowadays includes almost all of biology, as well as parts of chemistry and physics. It takes a central position in biology because insects are the most abundant animal group, half of them are herbivores and they dominate all terrestrial ecosystems. Knowledge of insect-plant interactions is thus fundamental to an understanding of the evolution of life on Earth.
Two major topics of worldwide concern give this field an extra dimension. First, large amounts of food crops are still lost due to insect pests. With the increasing concern for environmental pollution and the subsequent plans to drastically reduce pesticides, integrated pest management and development of resistant crops become a major focus in agriculture. The importance of the study of insect-plant relationships is thus continuously augmented. Clearly, successful pest control demands sufficient fundamental knowledge of pest-host interactions. Second, such work can contribute towards stopping or even counterbalancing the threatening biodiversity crisis thanks to an understanding of how the interaction of insects and plants has influenced and still influences the diversification and speciation (evolution) of both groups. These problems should, of course, be approached at a multitrophic level.