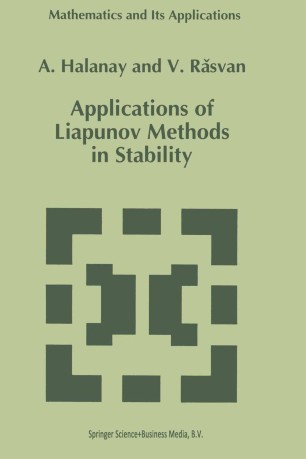 Applications of Liapunov Methods in Stability

Part of the Mathematics and Its Applications book series (MAIA, volume 245)

The year 1992 marks the centennial anniversary of publication of the celebrated monograph "The General Problem of Stability of Motion" written by A. M. Liapunov. This anniversary inspires to think about the way theory and applications have developed during this century. The first observation one can make is that the so-called "second method", nowadays known as the "Liapunov function method", has received more attention than the "first method"; let us also mention the study of critical cases, which brought more attention recently in connection with the study of bifurcations and with nonlinear stabilization. One of the reasons of popularity of the Liapunov function approach might be the fact that, in many situations in science and engineering, and not only in mechanics, which was the main source of inspiration for the work of Liapunov, natural Liapunov functions may be proposed, intimately connected with the properties of the processes. It is one of the purposes of this book to advocate this idea. From the mathematical viewpoint, the century after the first appear­ ance of Liapunov's monograph has been characterized both by general­ izations and by refinements of Liapunov's ideas. But we feel that the most spectacular progress is the understanding of the wide possibilities open for applications by the use of Stability Theory as constructed by Liapunov a century ago. We have tried to show some of the ideas in this direction by start­ ing with our personal experience in the study of some models.