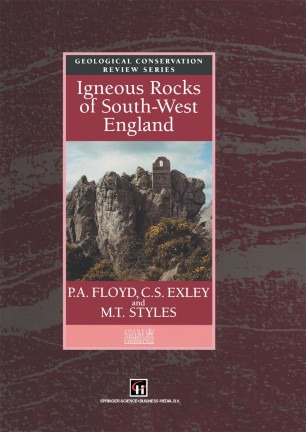 This volume illustrates some of the significant aspects of magmatic activity from Devonian (408 million years ago) to early Permian (270 million years ago) times in SW England. This period covers the progressive development of the Variscan mountain-building episode, from initial basin formation to final deformation and the subsequent development of a fold mountain belt - the Variscan Orogen. Both extrusive (volcanic) and intrusive (plutonic) rocks are found in the orogen, and chart the various stages of its magmatic development. The sites described in this volume are key localities selected for conservation because they are representative of the magmatic history of the orogen from initiation to stabilization. Some of the earliest volcanic activity in the Devonian is represented by submarine basaltic and rhyolitic lavas developed in subsiding basins, caused by the attenuation of the existing continental crust. In some cases, extensive rifting and attendant magmatism produced narrow zones of true oceanic crust, whereas elsewhere basaltic volcanism is related to fractures in the continental crust at the margins of the basins. After the filling of the sedimentary basins, and their deformation caused by crustal shortening (late Carboniferous Period), further activity is manifested by the emplacement of the Cornubian granites and later minor basaltic volcanism in the early Permian. Accounts of the constituent parts of this history have enriched geological literature from the nineteenth century onwards, and have contributed to the advancement and understanding of magmatic and tectonic processes.

The authors have done an excellent job of describing the sites and explaining their significance. They provide an up-to-date bibliography for the specialist reader and a glossary for the non-specialist. This volume is beautifully produced and very well illustrated... This review will be of lasting value and many geologists who know the region will want to own a copy... - Mineralogical Magazine; Detailed description of the sites is straightforward and didactically presented: high-lights, introduction, description, interpretation and conclusion. This scheme, followed throughout the book, is an excellent and useful idea...straightforward and clear explanations of sites and geologic problems presented make this book an excellent companion for field use - Lithos; a detailed listing of the most 'significant' igneous localities in Devon and Cornwall...excellently presented...of the highest quality. Serious libraries of geology will want copies - Geological Magazine; provides a wealth of geological data in an easily accessible format...highly readable accounts of the geology at a locality and regional level which would act as a starting point for deeper research...I would strongly recommend that all tertiary teaching institutions in Great Britain with a geology course consider purchase of the volume for their libraries - Lithos; this volume constitutes a good background for all the visitors of the south-west England who desire a general view of the Hercynian history of this area or to prepare a geological field-trip in this region - Earth-Science Reviews
Buy options