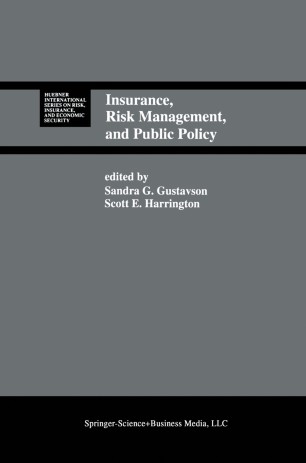 Essays in Memory of Robert I. Mehr

Five years ago the world lost one of its most prolific insurance scholars, Dr. Robert I. Mehr. His death in 1988 signalled the passing of not only a gifted writer and researcher, but also a pioneering teacher, mentor, and friend. The essays compiled within this volume are intended as an appropriate tribute to this occasionally outrageous individual who touched the lives of so many within the insurance community. Bob Mehr was a teacher who expected and demanded nothing less than perfect scholarship and flawless, efficient writing. Among alumni of the University of lllinois insurance doctoral program, stories still abound of late night and early morning sessions in which students and professor painstakingly debated precise words and phrases for dissertations, journal articles, and textbooks. Bob's respect for language was both immense and contagious, if at times more than a little compulsive. He joked that he could not read letters or novels without pencil in hand for editing. Bob's respect for his doctoral students was equally evident. The confidence he displayed in his students' abilities was sometimes startling, but "competence assumed" often begot "competence in fact." The accomplishments and records amassed by the many who studied with Bob Mehr are impressive and ongoing. On the dedication page in his final textbook, Fundamentals of Insurance, Bob spoke of his affection for those he called his "academic progeny" and wished them happiness as they build their own academic families.