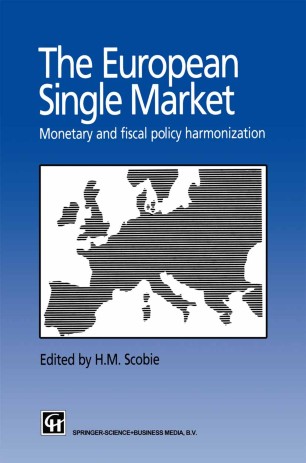 THE EUROPEAN SINGLE MARKET This volume comprises a collection of papers, some of which were presented at different workshops organized by the European Economics and Financial Centre (London), in conjunction with various European central banks. In addition the book contains, in Chapter 2, the text of a memorial lecture on Trade and Financial Relationships of the US and Europe given by this author in New York. The lecture, known as the Henry George Lecture, was given at St John's University in New York in April 1993. The workshops were part of a series of workshops, the first of which was hosted by the Central Bank of Finland. At these workshops usually some 20 central banks from Europe, the Federal Reserve Board and various other central banks were present. Furthermore the workshops contain papers from international organizations such as the OECD, European Commission, Bank for International Settlement, government ministries, commercial banks, re­ search institutes and academics from Europe and elsewhere. The two workshops from which some of these papers were drawn were those held at the Central Bank of the Netherlands and the Central Bank of Austria. The workshop held at the Central Bank of the Netherlands (De Nederlandsche Bank), was on Policy Coordination, and took place during 2-4 November, 1992. The one held at the Central Bank of Austria (6stereichische Bank), was on Policy Formulation in Interdependent Market, and took place during 24-26 March 1993.