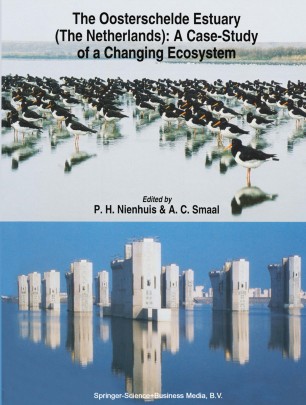 The Oosterschelde Estuary (The Netherlands): a Case-Study of a Changing Ecosystem

Part of the Developments in Hydrobiology book series (DIHY, volume 97)

The Oosterschelde estuary is one of the estuaries in the Netherlands which remained after the Delta scheme was completed in 1986. In the seventies the Oosterschelde became a national symbol of the change in political thinking and decision making about the values of our natural environment. As a result of political decision a storm surge barrier was built in the mouth of the estuary, as a compromise between safety for the human population and nature conservation.
Owing to the broad interest in the meaning of the Oosterschelde estuary for Dutch and international societies, it became one of the most intensively studied coastal ecosystems in Western Europe. In an interdisciplinary approach of several state agencies and universities, a broad spectrum of physical, chemical and biological research has been carried out during the period of 1980--1989, dedicated to the structure and functioning of the saline ecosystem. The undisturbed estuary was studied during the period between 1980--1984. Large mathematical models had been constructed before 1986, to simulate future changes in the ecosystem. Further studies after the completion of the storm surge barrier (1986--1989) have been used for verification of the model. The integrated and summarized knowledge of the Oosterschelde ecosystem is used by water managers and nature and fisheries conservationists.
A case study for professional civil engineers, ecologists, marine biologists, water managers, decision makers, university students and anyone interested in physical, chemical and biological estuarine and coastal sciences.

`The book is a must for everyone interested in and working on integrated water management. Those interested in the environmental effects of dam construction are provided with an essential reference work. Finally, the growing discussion on the impacts of sea-level rise due to global change can be stimulated by the results of this outstanding piece of research.'
International Journal of Environment and Pollution, 5:4-6, 1995