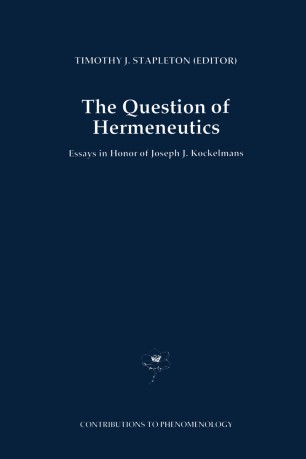 The Question of Hermeneutics

Part of the Contributions to Phenomenology book series (CTPH, volume 17)

by Pierre Kerszberg Joseph J. Kockelmans: A Biographical Note Joseph Kockelmans was born on December I, 1923, at Meerssen in the Netherlands. In 1951 he received his doctoral degree in philosophy from the Institute for Medieval Philosophy, Angelico, Rome. Earlier on, he had earned a "Baccalaureate" and a "Licence" from the same institution. Upon his return to the Netherlands, he engaged in a series of post-doctoral studies. His first subject was mathematics, which he studied under H. Busard who taught at the Institute of Technology at Venlo (1952-55). A major turning-point then occurred when, from 1955 to 1962, his post-doctoral research centered simultaneously around physics under A. D. Fokker at the University of Leyden, and phenomenology under H. L. Van Breda at the Husserl Archives of the University of Louvain. Still in the Netherlands, his first position as professor of philosophy was at the Agricultural University of Wageningen from 1963 to 1964. Even though he had been a Visiting Professor at Duquesne University in 1962, the year 1964 marked the actual beginning of his career in the United States. He began by holding a professorship at the New School for Social Research in New York (1964-65). Before establishing himself permanently at the Pennsylvania State University from 1968 onward, where he became a Distinguished Professor of Philosophy in 1990, he also held a professorship at the University of Rittsburgh from 1965 to 1968.