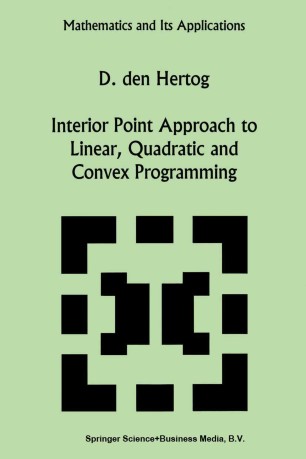 Part of the Mathematics and Its Applications book series (MAIA, volume 277)

This book describes the rapidly developing field of interior point methods (IPMs). An extensive analysis is given of path-following methods for linear programming, quadratic programming and convex programming. These methods, which form a subclass of interior point methods, follow the central path, which is an analytic curve defined by the problem. Relatively simple and elegant proofs for polynomiality are given. The theory is illustrated using several explicit examples. Moreover, an overview of other classes of IPMs is given. It is shown that all these methods rely on the same notion as the path-following methods: all these methods use the central path implicitly or explicitly as a reference path to go to the optimum.
For specialists in IPMs as well as those seeking an introduction to IPMs. The book is accessible to any mathematician with basic mathematical programming knowledge.