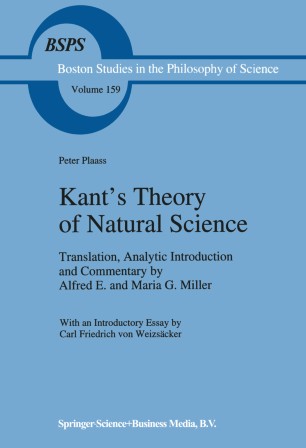 Part of the Boston Studies in the Philosophy of Science book series (BSPS, volume 159)

Plaass's treatise stood at the beginning of a renewed wave of scholarship regarding Kant's Metaphysical Foundations of Natural Science (MF). Plaass argues that the MF represents an integral step in Kant's development between the two editions of the Critique of Pure Reason. The MF repeats the `Copernican turn', using the conditions of subjectivity to derive the metaphysical determinations of `matter' as the object of natural science with the new method called `metaphysical construction', which simultaneously grounds the mathematizability of physics. The translators provide background and analysis of Plaass's work, extend it to include the body of the MF and offer a variation on the analysis of the relationship between mathematics and metaphysics in the MF. They discuss its relevance for contemporary paradigm-dependency approaches to the philosophy of science and for philosophical hermeneutics. The book will be of interest to Kant specialists as well as to students of the philosophy of science in general.

` I have read the text and want to congratulate (the translators). The translation of Plaass' book is not only accurate but charming in style. It could not have been better.
(The) introductory commentary is an excellent exposition of the whole issue of Kant's transition from the Critique to the Metaphysical Foundations . The problem as such needed critical consideration, and (this has been) done in an expert way. ' W.H. Werkmeister

` Published a year before the revised edition of the Critique of Pure Reason, Kant's Metaphysical Foundations of Natural Science constitutes the first instalment of his physics and a central part of the system of transcendental philosophy ensuing, as promised, from the Critique. Yet far too little attention has been paid by Kant scholars, especially on this side of the Atlantic, to this crucial work. In their study, Kant's Theory of Natural Science, Drs. Alfred and Maria Miller take a major step towards remedying this unfortunate neglect. The Millers have performed an important service by translating Peter Plaass's thoughtful investigation of the Preface to Kant's work. They have, however, in their own right also made a highly significant contribution to the understanding of Kant's physics in this pivotal work by ingeniously reconstructing its arguments and methods as a whole. '
Daniel O. Dahlstrom, Professor of Philosophy, The Catholic University of America