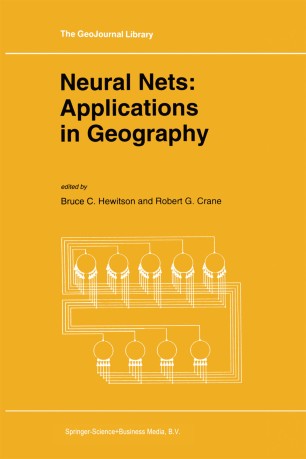 Part of the The GeoJournal Library book series (GEJL, volume 29)

Neural nets offer a fascinating new strategy for spatial analysis, and their application holds enormous potential for the geographic sciences. However, the number of studies that have utilized these techniques is limited. This lack of interest can be attributed, in part, to lack of exposure, to the use of extensive and often confusing jargon, and to the misapprehension that, without an underlying statistical model, the explanatory power of the neural net is very low. Neural Nets: Applications for Geography attacks all three issues; the text demonstrates a wide variety of neural net applications in geography in a simple manner, with minimal jargon.
The volume presents an introduction to neural nets that describes some of the basic concepts, as well as providing a more mathematical treatise for those wishing further details on neural net architecture. The bulk of the text, however, is devoted to descriptions of neural net applications in such broad-ranging fields as census analysis, predicting the spread of AIDS, describing synoptic controls on mountain snowfall, examining the relationships between atmospheric circulation and tropical rainfall, and the remote sensing of polar cloud and sea ice characteristics.
The text illustrates neural nets employed in modes analogous to multiple regression analysis, cluster analysis, and maximum likelihood classification. Not only are the neural nets shown to be equal or superior to these more conventional methods, particularly where the relationships have a strong nonlinear component, but they are also shown to contain significant explanatory power. Several chapters demonstrate that the nets themselves can be decomposed to illuminate causative linkages between different events in both the physical and human environments.