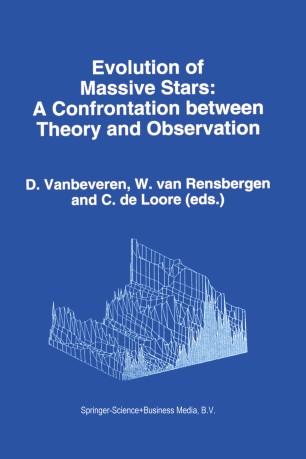 A Confrontation between Theory and Observation

Massive stars occupy an exceptional place in general astrophysics. They trigger many if not all of the important processes in galactic evolution whereas due to their intrinsic brightness, they offer the (only until now) possibility to study the stellar content and stellar behaviour in distant galaxies. The last, say, 25 years, massive stars have been the subject of numerous meetings discussing the influence of massive stars on population synthesis, the number distribution of different types of massive stars, the LBV phenomenon, WR stars, X-ray binaries, stellar winds in massive stars, chemical pecularities in massive stars, supernova explosions of massive stars and the important SN1987A event, the influence of massive stars and chemical evolution of galaxies. It is clear that without a theory of stellar evolution, the study of these topics loses a lot of its significance. Massive star evolution therefore got a chance in these meetings, but rarely as a prime subject. The state of the art, the physical processes and the uncertainties in stellar evolution were barely touched. Even more, the influence of close binaries in all these massive star meetings slowly disappeared the last, say, 13 years without any scientific justification, although a significant fraction of stars occurs in close binaries with periods small enough so that both components will interact during their evolution. Denying the binaries or not discussing their influence on results and conclusions, makes the latter very uncertain or even completely unreliable.