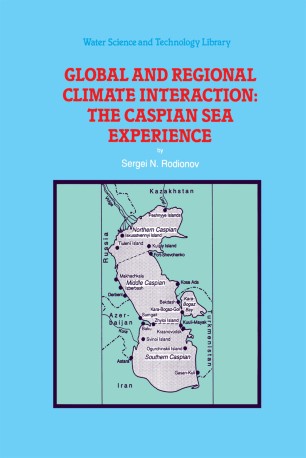 The Caspian Sea is the world's largest inland body of water both in area and volume. Its drainage area is approximately 3. 5 million square kilometers, extending 2500 km in length, 35°N to 600N, and on average 1000 km wide, 400E 0 to 60E (Fig. 1). Located in a large continental depression about 27 m below sea level and with no surface outlets, the Caspian Sea is particularly sensitive to climatic variations. As with other closed-basin lakes, its level depends on the balance between precipitation and evaporation, which is directly linked to atmospheric circulation. Because of its large area and volume of water, the Caspian Sea effectively. filters climatic noise, and as such may serve as a good indicator of climatic changes through observed changes in its water level. Recently, the Caspian Sea has come under increased attention from physical and social scientists owing to its unique natural characteristics as well as the' very important role it plays in the ecoriomil:!s of such countries as Azerbaijan" Russia, Kazakhstan, Turkmenistan and Iran. Dissolution of the Soviet Union and creation of new independent states resulted in difficult negotiations to divide the wealth of the Caspian Sea and to establish new economic zones. According to one assessment (Ratkovich, 1988), the Caspian Sea basin accounted for about one-third of the total economic output, one-fifth of the agricultural production, and one-third of the hydroelectric production of the former Soviet Union.