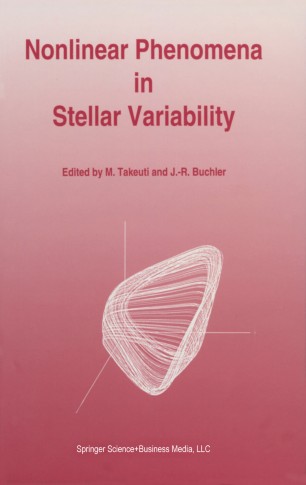 The nonlinear theory of oscillating systems brings new aspects into the study of variable stars. Beyond the comparison of linear periods and the estimate of stability, the appearance and disappearance of possible modes can be studied in detail. While nonlinearity in stellar pulsations is not a very complicated concept, it generally requires extensive and sometimes so­ phisticated numerical studies. Therefore, the development of appropriate computational tools is required for applications of nonlinear theory to real phenomena in variable stars. Taking trends in variable star studies into consideration, the International Astronomical Union organized a colloquium for the nonlinear phenomena of variable stars at Mito, Japan in 1992. The colloquium served to give an overview of the new frontiers of variable star studies and to encourage further development of this field. The colloquium covered the fundamental theory, interesting observational facts, and the numerical modeling. The publication of the proceedings was somewhat delayed since one of the editors, M. T., was overwhelmed by administrative work. We are sorry that the excellent reviews of Drs. H. :Mori, M. Sano, and K. Makishima cannot be found in the proceedings. We also miss the summary given by Dr. W. W. Dziembowski. Throughout the editing procedure Dr. Y. Tanaka of Ibaraki University kindly helped us. Because of the unfortunate delay of the publication~ the significance of several papers may be affected. Even so, we believe that the papers are useful to variable star researchers because of their scientific importance.