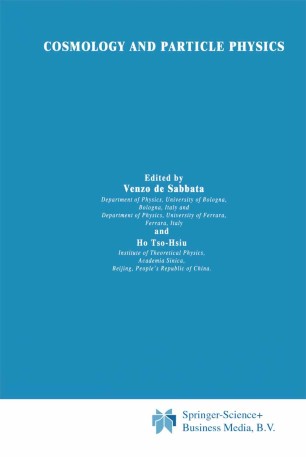 In recent years there has been a steadily increasing cross-fertilization between cosmology and particle physics, on both the theoretical and experimental levels. Particle physics has provided new experimental data from the big accelerators in operation, and data from space satellites are accumulating rapidly. Cosmology is still one of the best laboratories for testing particle theory.
The present work discusses such matters in the context of inflation, strings, dark matter, neutrinos and gravitational wave physics in the very early universe, field theory at the Planck scale, and high energy physics. A particular emphasis has been placed on a new topology for spatial infinity, on the relation between temperature and gravitational potential, a canonical formulation of general relativity, the neutrino mass, spin in the early universe, the measurement of gravity in the 10--100 m range, galaxy--galaxy and cluster--cluster correlation, black holes, string theory and string/string duality.
The work also presents a beautiful review of high energy elementary particle physics, treating the meaning, status and perspectives of unification and standard model gauge couplings.