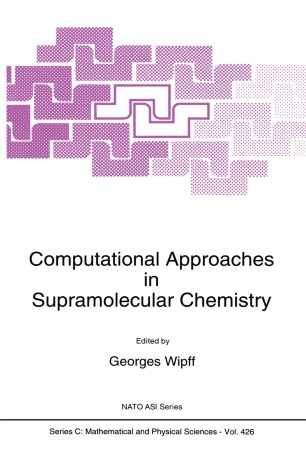 Supramolecular chemistry has been defined by J.-M. Lehn as "a highly interdisciplinary field of science covering the chemical, physical, and biological features of chemical species of higher complexity, that are held together and organized by means of intermolecular (noncovalent) binding interactions" (Science, 1993). Recognition, reactivity, and transport represent three basic functional features, in essence dynami~s, which may be translated into structural features. The purpose of the NATO workshop which took place september 1-5, 1993 at the Bischenberg (near Strasbourg) was to present computations which may contribute to the atomic level understanding of the structural and thermodynamical features involved in the processes of molecular recognition and supramolecular organization. of "supra-molecular modeling". Other The main focus was therefore, on the many facets applications of computers in chemistry, such as automation, simulation of processes, procedures for fitting kinetic or thermodynamic data, computer assisted synthetic strategies, use of data bases for structure elucidation or for bibliographic searches, have an obvious impact in supramolecular chemistry as well, but were not presented at the workshop.