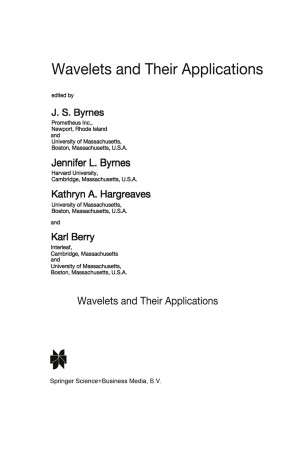 Wavelets and Their Applications

It is probably true quite generally that in the history of human thinking the most fruitful developments frequently take place at those points where two different lines of thought meet. Hence, if they actually meet, that is, if they are at least so much related to each other that a real interaction can take place, then one may hope that new and interesting developments may follow. Werner Heisenberg This volume contains papers presented at the August 1992 NATO Advanced Study Institute on Wavelets and Their Applications. The conference was held at the beautiful Il Ciocco resort near Lucca, in the glorious Tuscany region of northern Italy. Once again we gathered at this idyllic spot to explore and extend the reciprocity between mathematics and engineering. The dynamic interaction between world-renowned scientists from the usu­ ally disparate communities of pure mathematicians and applied scientists, which occurred at our 1989 and 1991 ASI's, continued at this meeting. Wavelet theory and technology is in an important growth stage at which theoretical and practical results are being compared with existing methods. There have been spectacular wavelet successes and sobering comparisons with traditional ideas-but still there is a wide expanse of scientific problems to explore. Since these problems lie at the forefront of both pure mathematics and applied science, our NATO ASI was especially pertinent at this time.