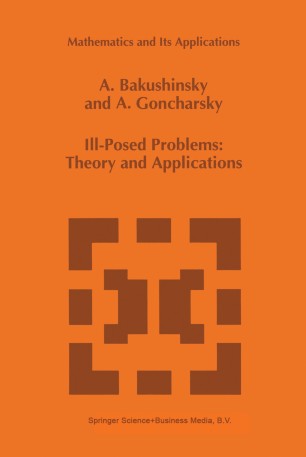 Part of the Mathematics and Its Applications book series (MAIA, volume 301)

Recent years have been characterized by the increasing amountofpublications in the field ofso-called ill-posed problems. This is easilyunderstandable because we observe the rapid progress of a relatively young branch ofmathematics, ofwhich the first results date back to about 30 years ago. By now, impressive results have been achieved both in the theory ofsolving ill-posed problems and in the applicationsofalgorithms using modem computers. To mention just one field, one can name the computer tomography which could not possibly have been developed without modem tools for solving ill-posed problems. When writing this book, the authors tried to define the place and role of ill­ posed problems in modem mathematics. In a few words, we define the theory of ill-posed problems as the theory of approximating functions with approximately given arguments in functional spaces. The difference between well-posed and ill­ posed problems is concerned with the fact that the latter are associated with discontinuous functions. This approach is followed by the authors throughout the whole book. We hope that the theoretical results will be of interest to researchers working in approximation theory and functional analysis. As for particular algorithms for solving ill-posed problems, the authors paid general attention to the principles ofconstructing such algorithms as the methods for approximating discontinuous functions with approximately specified arguments. In this way it proved possible to define the limits of applicability of regularization techniques.