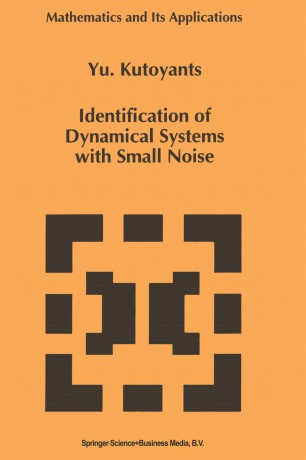 Part of the Mathematics and Its Applications book series (MAIA, volume 300)

Small noise is a good noise. In this work, we are interested in the problems of estimation theory concerned with observations of the diffusion-type process Xo = Xo, 0 ~ t ~ T, (0. 1) where W is a standard Wiener process and St(') is some nonanticipative smooth t function. By the observations X = {X , 0 ~ t ~ T} of this process, we will solve some t of the problems of identification, both parametric and nonparametric. If the trend S(-) is known up to the value of some finite-dimensional parameter St(X) = St((}, X), where (} E e c Rd , then we have a parametric case. The nonparametric problems arise if we know only the degree of smoothness of the function St(X), 0 ~ t ~ T with respect to time t. It is supposed that the diffusion coefficient c is always known. In the parametric case, we describe the asymptotical properties of maximum likelihood (MLE), Bayes (BE) and minimum distance (MDE) estimators as c --+ 0 and in the nonparametric situation, we investigate some kernel-type estimators of unknown functions (say, StO,O ~ t ~ T). The asymptotic in such problems of estimation for this scheme of observations was usually considered as T --+ 00 , because this limit is a direct analog to the traditional limit (n --+ 00) in the classical mathematical statistics of i. i. d. observations. The limit c --+ 0 in (0. 1) is interesting for the following reasons.