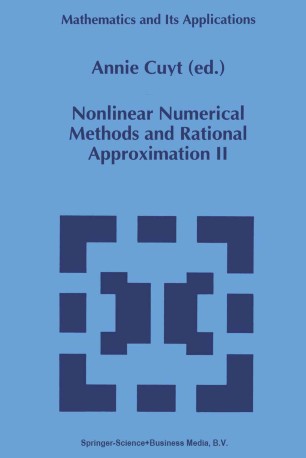 Part of the Mathematics and Its Applications book series (MAIA, volume 296)

These are the proceedings of the international conference on "Nonlinear numerical methods and Rational approximation II" organised by Annie Cuyt at the University of Antwerp (Belgium), 05-11 September 1993. It was held for the third time in Antwerp at the conference center of UIA, after successful meetings in 1979 and 1987 and an almost yearly tradition since the early 70's. The following figures illustrate the growing number of participants and their geographical dissemination. In 1993 the Belgian scientific committee consisted of A. Bultheel (Leuven), A. Cuyt (Antwerp), J. Meinguet (Louvain-Ia-Neuve) and J.-P. Thiran (Namur). The conference focused on the use of rational functions in different fields of Numer­ ical Analysis. The invited speakers discussed "Orthogonal polynomials" (D. S. Lu­ binsky), "Rational interpolation" (M. Gutknecht), "Rational approximation" (E. B. Saff) , "Pade approximation" (A. Gonchar) and "Continued fractions" (W. B. Jones). In contributed talks multivariate and multidimensional problems, applications and implementations of each main topic were considered. To each of the five main topics a separate conference day was devoted and a separate proceedings chapter compiled accordingly. In this way the proceedings reflect the organisation of the talks at the conference. Nonlinear numerical methods and rational approximation may be a nar­ row field for the outside world, but it provides a vast playground for the chosen ones. It can fascinate specialists from Moscow to South-Africa, from Boulder in Colorado and from sunny Florida to Zurich in Switzerland.