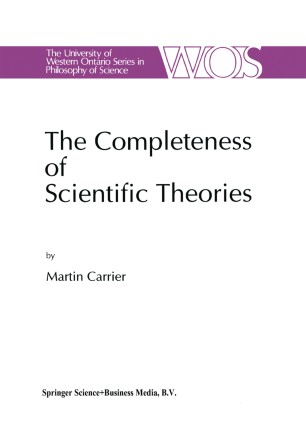 The Completeness of Scientific Theories

On the Derivation of Empirical Indicators within a Theoretical Framework: The Case of Physical Geometry

Part of the The University of Western Ontario Series in Philosophy of Science book series (WONS, volume 53)

Earlier in this century, many philosophers of science (for example, Rudolf Carnap) drew a fairly sharp distinction between theory and observation, between theoretical terms like 'mass' and 'electron', and observation terms like 'measures three meters in length' and 'is _2° Celsius'. By simply looking at our instruments we can ascertain what numbers our measurements yield. Creatures like mass are different: we determine mass by calculation; we never directly observe a mass. Nor an electron: this term is introduced in order to explain what we observe. This (once standard) distinction between theory and observation was eventually found to be wanting. First, if the distinction holds, it is difficult to see what can characterize the relationship between theory :md observation. How can theoretical terms explain that which is itself in no way theorized? The second point leads out of the first: are not the instruments that provide us with observational material themselves creatures of theory? Is it really possible to have an observation language that is entirely barren of theory? The theory-Iadenness of observation languages is now an accept­ ed feature of the logic of science. Many regard such dependence of observation on theory as a virtue. If our instruments of observation do not derive their meaning from theories, whence comes that meaning? Surely - in science - we have nothing else but theories to tell us what to try to observe.