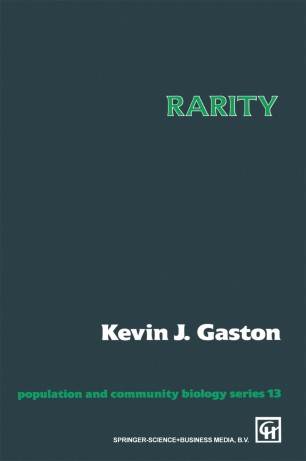 To say you are writing about rarity is to invite two kinds of response. Either one provokes a discussion of what rarity is, or some comment on the complex­ ity of the subject. The objective of this book is to explore the nature of rarity, its complexity if you like, from one particular perspective on what rarity is. Primarily, it is an opportunity to review, to synthesize, and to question. The book is an attempt to draw together a vast body of literature, to extract from it some general principles, and to raise question marks over areas the founda­ tions of which appear to be either absent or crumbling. A perusal of prefaces suggests that they often dwell as long upon what a book is not about, as upon what it does concern. True to such a tradition, I should state that this is specifically not a book about conservation, although in some quarters anything about rarity is viewed as something about conser­ vation. Nor does it contain more than a passing reference to the undoubtedly important issues of the role of genetics in rarity. Examples have been drawn from a wide variety of taxa. They are, nonethe­ less, somewhat depauperate in cases from marine systems. In part this bias results from the unevenness of my familiarity with the literature, in part it perhaps also reflects differences in the questions asked and approaches to the study of communities and assemblages in terrestrial and marine systems.

`This advanced work should be studied by wildlife biologists, conservation biologists, and ecologists.'
Choice
`Ecologists are fortunate to have such a solid foundation for the ideas and patterns that contribute to our notions and interpretations of rarity.'
Ecology
`...few population biologists or conservation ecologists can afford not to have this book to hand. A book on rarity is itself a rarity, and we should thank the author and publisher for noticing and partially filling a gap in the literature.'
Biodiversity Letters
`Specially welcome is this book by an acknowledged expert in the field... it all adds up to a remarkably successful synthesis that should appeal to both theoretical biologists in their laboratories and conservation biologists on the ground.'
Biodiversity and Conservation