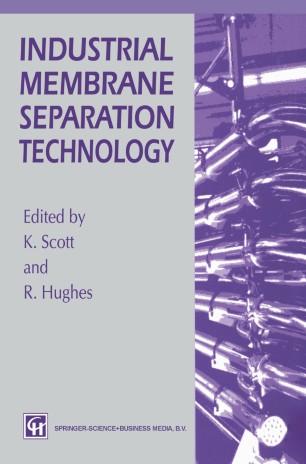 Membrane science and technology is an expanding field and has become a prominent part of many activities within the process industries. It is relatively easy to identify the success stories of membranes such as desali­ nation and microfiltration and to refer to others as developing areas. This, however, does not do justice to the wide field of separations in which membranes are used. No other 'single' process offers the same potential and versatility as that of membranes. The word separation classically conjures up a model of removing one component or species from a second component, for example a mass transfer process such as distillation. In the field of synthetic membranes, the terminology 'separation' is used in a wider context. A range of separations of the chemical/mass transfer type have developed around the use of membranes including distillation, extraction, absorption, adsorption and stripping, as well as separations of the physical type such as filtration. Synthetic membranes are an integral part of devices for analysis, energy generation and reactors (cells) in the electrochemical industry.