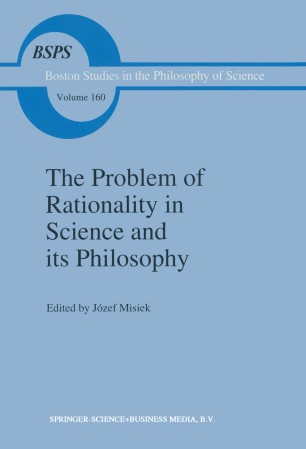 On Popper vs. Polanyi The Polish Conferences 1988–89

Part of the Boston Studies in the Philosophy of Science book series (BSPS, volume 160)

Rationality of science was the topic of two conferences (held in 1988 and 1989) organized by the Department of Philosophy of Science, Institute of Philosophy, Jagiellonian University. Both conferences included a small group of invited speakers. This book contains a selection of papers presented there. It is intended mainly for specialists in the philosophy of science and scientists interested in philosophy. Students and especially postgraduate students would also benefit from reading it. The first conference, 'Popper, Polanyi and the Notion of Rationality', was held from 1 to 5 October 1988 in Janowice. The second conference, 'The Aim and Rationality of Science', was held in Cracow at the Jagiellonian Univer­ sity, from 4-10 June 1989. The topics of both conferences were inspired by our late friend Dr. Tomasz Kocowski, who many years earlier invited me and my colleagues from the Department to participate in research concerning the problem of creativity, and serve him and other psychologists as methodological advisors. Personal contacts with this intelligent and inquisitive man helped us to realize that we could not fulfill our task while adhering to the received view in the philoso­ phy of science. This experience helped us to see science not only as scientific knowledge but also as a process of research. We then turned our attention to Michael Polanyi, who seemed to provide the philosophy we were looking for.