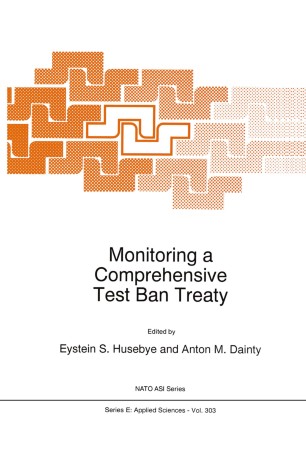 An international treaty banning the testing of any nuclear device in any environment - a comprehensive test ban treaty (CTBT) - has been on the political agenda for nearly 40 years. Objections to a CTBT have been political, technical, or a combination of both. However, the possibilities seem better after the end of the Cold War. In the prevailing, cooperative disarmament climate a CTBT appears likely to be approved by most countries in 1996. Hence the great current interest in monitoring technologies and capabilities.
Such issues are comprehensively addressed here, a preamble being devoted to the political developments and setbacks over the past 40 years. Since seismic means are considered the dominant monitoring element, they are explored in detail. Contributions cover network deployments, advanced signal processing, wave propagation in heterogeneous media, and seismic source representations, and a variety of techniques for source classification (including neural networks). Complementary monitoring techniques, such as hydroacoustics, radionuclides and infrasound, are also summarised. The IAEA operation for monitoring compliance with the Non-Proliferation Treaty is also presented.
The book also includes eyewitness accounts of the Soviet 50 Mt megabomb development and test, as well as the efforts made by the state to monitor the nuclear test programmes of the western powers. Includes some 33 articles written by distinguished scientists active in CTBT monitoring research for decades.