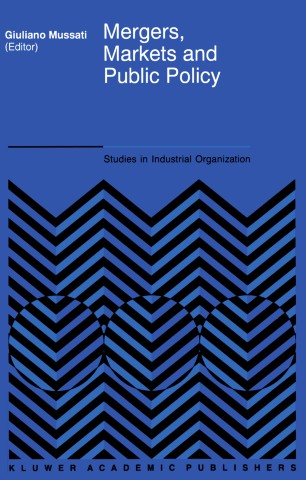 GIULIANO MUSSATI Why do mergers occur, which are their effects on social welfare and which is the best economic policy toward them? These three questions have been puzzling industrial economists since the end of the last century when the first great merger wave has come about in the US. They have returned at the centre of the stage of the theoretical and empirical economic research during the last decade when merger and acquisition activity became one of the most evident firms' activities in all industrialised countries, being fostered by some general and country specific facts. These facts have been identified in the appearance of new financial instruments facilitating fund raising by firms, in the benevolent behaviour of the authorities in charge of competition policy during the Reagan administration in the US, while inter­ nal market completion has become a strong incentive for European firms to reach a true continental dimension in the UE through external growth. However a robust and univocal answer to these questions has not yet been found in spite of its importance not only from the theoretical point of view, but also from the normative one. In fact the correct identification of firms' motivations in pursuing merger and acquisition operations and of their consequences on social welfare would help the choice by administra­ tive authorities of different possible options in competition and industrial policies.