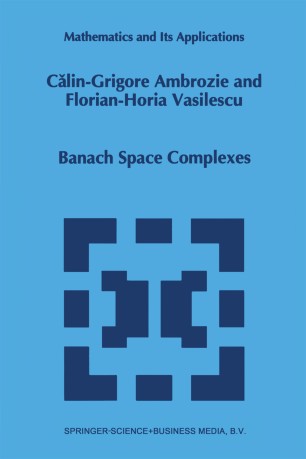 Part of the Mathematics and Its Applications book series (MAIA, volume 334)

The aim of this work is to initiate a systematic study of those properties of Banach space complexes that are stable under certain perturbations. A Banach space complex is essentially an object of the form 1 op-l oP +1 ... --+ XP- --+ XP --+ XP --+ ... , where p runs a finite or infiniteinterval ofintegers, XP are Banach spaces, and oP : Xp ..... Xp+1 are continuous linear operators such that OPOp-1 = 0 for all indices p. In particular, every continuous linear operator S : X ..... Y, where X, Yare Banach spaces, may be regarded as a complex: O ..... X ~ Y ..... O. The already existing Fredholm theory for linear operators suggested the possibility to extend its concepts and methods to the study of Banach space complexes. The basic stability properties valid for (semi-) Fredholm operators have their counterparts in the more general context of Banach space complexes. We have in mind especially the stability of the index (i.e., the extended Euler characteristic) under small or compact perturbations, but other related stability results can also be successfully extended. Banach (or Hilbert) space complexes have penetrated the functional analysis from at least two apparently disjoint directions. A first direction is related to the multivariable spectral theory in the sense of J. L.