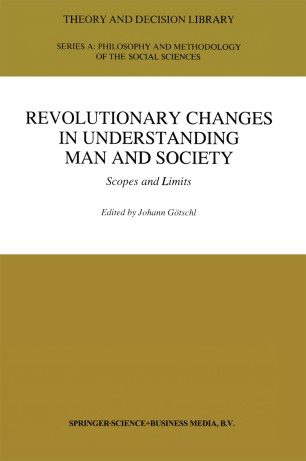 JOHANN GOTSCHL Over the last decades, social philosophers, economists. sociologists, utility and game theorists, biologists, mathematicians, moral philosophers and philosophers have created totally new concepts and methods of understanding the function and role of humans in their modern societies. The years between 1953 and 1990 brought drastic changes in the scientific foundations and dynamic of today's society. A burst of entirely new, revolutionary ideas, similar to those which heralded the beginning of the twentieth century in physics, dominates the picture. This book also discusses the ongoing refutation of old concepts in the social sciences. Some of them are: the traditional concepts ofrationality, for example, based on maximization of interests, the linearity of axiomatic methods, methodological individualism, and the concept of a static society. Today the revolutionary change from a static view of our society to an evolutionary one reverberates through all social sciences and will dominate the twenty-first century. In an uncertain and risky world where cooperation and teamwork is getting more and more important, one cannot any longer call the maximization of one's own expectations of utility or interests "rational" .