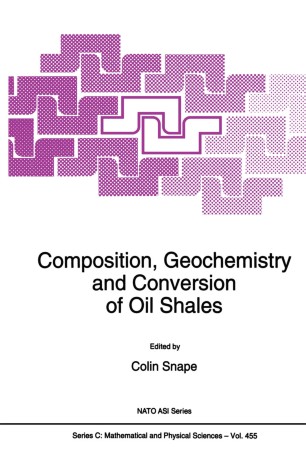 Oil shales are broadly dermed as petroleum source rocks containing sufficiently high contents of organic matter (above ca 10-15 wt. %) to make utilisation a possibility. Like coal, the world's reserves of oil shales are vast being many times larger than those proven for crude oil. Indeed, some of the largest deposits occur in the USA and Europe where Estonia and Turkey have large reserves. The first recorded interest in oil shale retorting was an English patent in 1694 (Eele, Hancock and Porter, No. 330) which refers to distilling noyle from some kind of stone". The oil shale retorting industry dates back to the middle of the last century, notably Scotland, Estonia, France and Sweden in Europe. Indeed, my own Department at the University of Strathclyde has a historical link with James "Paraffin" Young, the founder of the Scottish oil shale industry who endowed a chair in Applied Chemistry. The growth of the oil industry saw the demise of the oil shale industry in most countries with the notable exception of Estonia, where kukersite has continued to be used for power generation and retorting. However, oil shale utilisation has attracted renewed attention since the early 1970s as a source of transport fuels and chemical feedstocks due to the the long term uncertainties over crude oil supplies.